Too Legit to Quit – Pineland Celebrates 31 Years of Service

Pineland Telephone has been fortunate to call Greg Williams part of the family for the past 31 years. When he first walked through the door in 1990, Greg thought he was taking a job for the summer; little did he know, he was stepping into his career. Over three decades later, we celebrate with Greg as he starts on his next journey – retirement. Before he clocked out for the final time, he sat down with us to reminisce about his years at Pineland.

How did you begin working at Pineland Telephone?

I was coming home from school for the summer and looking for a job. Pineland Telephone was one of the sought after and prominent employers in Candler County, and I was familiar with a few of the employees already. My initial plan was to return to school in Athens in the fall; however, before the summer ended, there was a position that opened in Construction. I decided to stay local, in my hometown, near my family. I applied for the full-time position and was hired for the job.

What are the positions that you held?

When I started, Pineland was switching over to electronic record keeping. Computers were first being introduced, and it was my job to go through the paper records, call customers to verify their information, and input it in the new system. Shortly after, I moved to construction, and was part of multiple crews for several years. For the last 15 years, I have been a technician with Install & Repair. I feel that being in construction gave me the opportunity to understand our service and I wish more employees could start there before going to other departments. It was hard work, there is a lot more equipment available now that is designed for the job. But it gave you a look at the whole picture – from burying the cable to inside installation. And because it was such hard work, you appreciated any moves you made forward.

There have been a lot of changes and innovations in the telecommunications industry since you started. Is there a particular advancement that stands out for you?

Telephone service started it all, like a “first child,” and led the way to be able to offer additional technology. I think one of the best decisions Pineland made was to offer internet, and then television service. Pineland started as a telephone company, and now we are in a time where people are dropping their [home] phones

It seems rare nowadays for someone to stay with the same company, or even in the same career for several years. What made you stay with Pineland?

It was great to have the opportunity to make a living while staying in my hometown. I enjoyed Athens, but I knew more people here – my friends and family were here. Pineland was an enjoyable, family oriented place. It was constantly growing, and even in challenging times, it was a stable place to be. It was a company that wasn’t going anywhere.

Was there a most memorable moment or takeaway from the past 31 years?

The relationship process. When you first start working with people you don’t know them, you learn to understand them as you work together. Many of the older guys, you had to figure out when they were serious or not – they could seem a little tough. Then as newer employees came in, you became the “older guy”. Working together built friendships, you were working with your friends on the job.

I have a project list. When you stop working, you start paying more attention to the things around you and find all the things that need to get done. I definitely plan on spending my time with family. I don’t really know what else yet. I have a degree in teaching – maybe I could do something in the school system, coaching, or broadcasting. It’s amazing to see people perform at their best.

We hear you gained the nickname “Hammer”. Would you care to elaborate?

There are some people, especially the younger guys, that think it came from playing sports. They can keep thinking that. What really happened, was when I first started Pineland, MC Hammer was hot, everyone was talking about him. He was coming to Savannah for a concert, and I asked my supervisor at the time – Willard Cameron – if I could go to Savannah that afternoon. He asked me if it was an emergency, and I said “Yes, I need to go to the MC Hammer concert.” To me, it was an emergency. I didn’t have time built up yet because I just started, but he didn’t think about that. When I got back, he called me into his office. “Greg, we have a problem. When you took time off, you didn’t have any time. As it stands, you owe Pineland a day.” I had to work two months to get out of the red, to get even for the concert. I asked if I could pay Pineland instead, and he told me I had to work it off. I learned then how valuable it was to build up time. Back then you could get a nickname in a heartbeat, and a lot of people wouldn’t share how they got theirs. For some,
you couldn’t call them by their nickname either, you weren’t “old enough” yet, or had to get to know them first.

When asked if it was worth it – Oh yeah! We went again a year or two later when he came back, but this time I had my time saved and asked in advance…and I didn’t tell anyone where I was going. I didn’t want to be Hammer 2 or something. But again, you can still believe it came from playing football.

Describe your time at Pineland in 3 words.

Just three words would be hard to explain what Pineland has been to me. It was a great learning experience, and probably one of the most innovative companies with which I have been involved. I am proud to have been a part of Pineland, and thankful that Pineland saw enough in me. Some people say I’m lucky because I am retiring, but that’s not luck. Luck means different things to different people. I was lucky to get the job, lucky to work with good people. I appreciate what Pineland offered me, so that I could be able to retire.

Greg will certainly be missed at Pineland but will always remain part of the family. Pictured, General Manager Dustin Durden recognizes Greg for his dedicated years of service. Greg is wearing his original work shirt from the construction department 31 years ago. Behind them – a projector screen with a photoshopped image of Greg with MC Hammer.

The official press release can be found here. 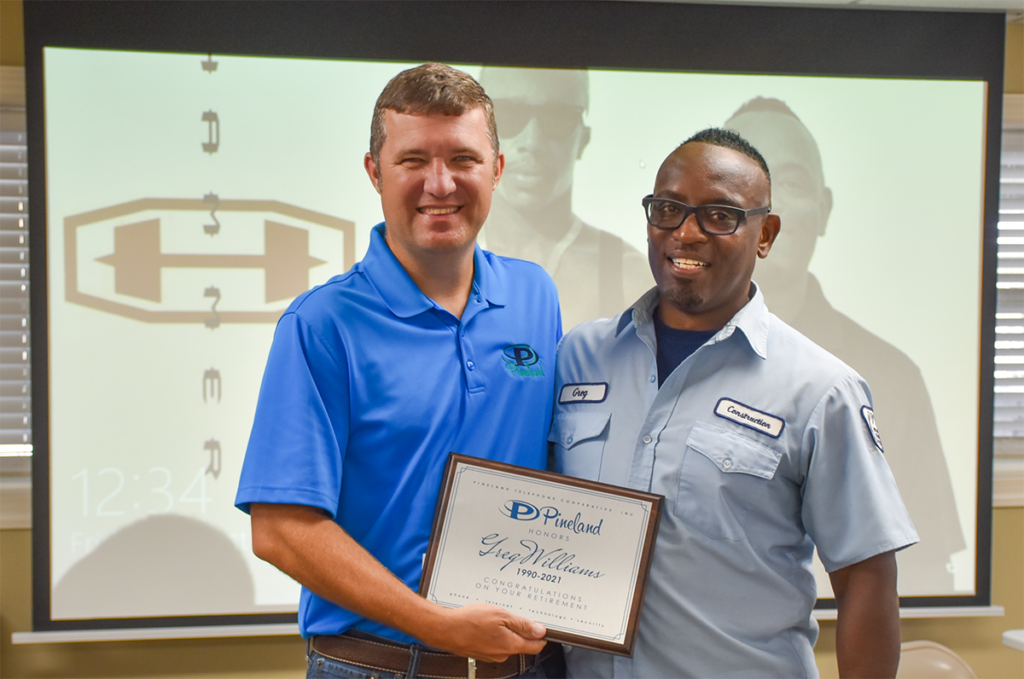