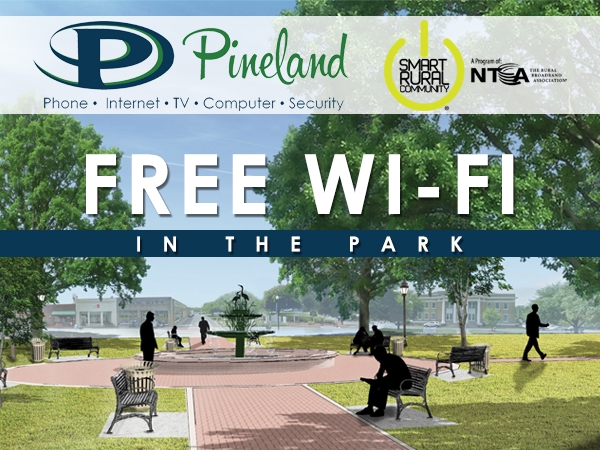 The Smart Rural Community Collaboration Challenge Grant provides up to $5000 to support the development and deployment of innovative broadband-enabled solutions to support rural commerce, economic development, education, energy, healthcare, public safety or other community-oriented initiatives.  The application deadline was Dec. 1, 2016, with winners announced at the Rural Telecom Industry Meeting and EXPO in San Diego earlier this month. Pineland Telephone was one of two winners in the nation, and was awarded just under $5000 to develop a wi-fi network in the newly remodeled downtown park.

All Collaboration Challenge Grants must have a matching element whether that be of cash or in-kind dollars.  The re-development and remodel of the park allowed for the monies used for it to be considered the matching component.  Pineland worked closely with City Manager, Mandi Cody and Public Works Director Cliff Hendrix to determine what funding was used as the match and how wi-fi in the park could benefit the downtown area current citizens and visitors.  James Owens, network engineer, worked closely with Pineland plant managers Mike Purvis and Wayne Foskey to determine the most suitable option for wi-fi deployment in the new park.  Dustin Durden, Pineland general manager, traveled to San Diego with several board members for the award announcement.

Pineland’s goal is to have the park wi-fi deployed by this year’s Another Bloomin’ Festival which will be April 15.